I am welcoming to my blog today my friend and awesome author John Turney. I mentioned him in a previous blog as an author who followed writer’s guidelines before pitching a story idea. He got his book contracts at Write-To-Publish so he seemed like someone we should get to know. When he’s not wearing his writer’s superhero cape he works as a CAD Technician for a pharmaceutical company in Ohio. Simply put he is an engineer. He’s had several articles published in e-zines as well as several flash fiction in Splickety Magazine. He attends Liberty Heights Church with his wife. They have two grown sons. Before we get started with this interview John has offered to send a copy of his book to one lucky winner who comments on my blog.

Cindy Huff: John is a delight to have you with us today. I just recently finished reading Innocent Blood and was drawn into the epic story. I felt like a movie playing before my eyes. Now, briefly tell us about your book for those who have not read it.

John Turney: My first novel is Innocent Blood: Reckoning of Equinox and was published by OakTara in 2013. Based on the Celtic legends of Halloween, it’s the tale of a young man—a college student—who has his life mapped out. When events force him to look at his plans, he has to decide if he’s going to pursue his dreams or make the sacrifice to do what’s right.

CH: Tell me, why did you choose to use Halloween as the place in time? That day is not very popular within Christian circles.

CH:Okay, okay we got that you love football. You’ve even added a football player as the enemy of your hero, not to mention a pivotal scene taking place on the grid iron. Sorry, I am just so excited about your novel. Continue please.

JT: Second, when the church avoids something—whether it’s a style of music, a people group because they’re not like us, or a particular holiday—it creates a spiritual vacuum. Rather than ignore Halloween, we should embrace it without embracing its darker elements. Give out candy, and not the cheap stuff. You might even have something for the parents as well. Have a Harvest Party at church and invite the neighborhood to your church for the event. Have goodies for the kids, perhaps bouncy houses, face painting, puppet shows and so on. Have fun with it. Instead of being against something, be for something.

So I chose Halloween, introduced some of its Celtic elements and wrote a story where the protagonist stands against the darkness. For the last 2,000+ years, the church has stood against the darkness of its time. We need to do so today. As a writer, this is one way I can do that.

CH: Good point. I appreciate your candor. Now, I have to know. As a mild-mannered engineer where did you learn about karate, sword fighting, police procedure, dwarfs, elves and the walking dead. And let’s not forget believable fight scenes.

JT: One writing motto is “write what you know.” However, if you don’t know something, then you can learn. And we live at a time where learning—or research—can be done by anyone, anywhere at any time. The internet provides a rich source of materials to help learn. For example, the internet offers videos of men and women in armor fighting with various swords. And they give explanations of the various moves. So I spent several hours watching these videos. I may not be able to physically handle a sword, but I learned how it was done. I’m not a cop, but I attend a writer’s conference (Mad Anthony in Hamilton, Ohio) that one year took its conferees to a community college that trains cops. Another year, it had three women from the TV show Police Women of Cincinnati explaining the ins and outs of their jobs. Other years various police agencies have sent officers to explain their duties. I also attended Lee Lofland’s Writers Police Academy and read his blog “The Graveyard Shift.” This weekend, I will be touring the crime lab in Columbus, Ohio with a Sisters in Crime writers’ group. If you don’t know something, go forth and learn. As to the elves, dwarves and the undead, I signed a nondisclosure agreement not to divulge their locations or how to contact them. They’re very private, so I respect that.

CH: Why base Innocent Blood in Ohio?

I based Innocent Blood in the southwest region of Ohio. At one time, Cincinnati had a large influx of both Irish and German peoples. So with, the Celtic culture comprised of western and northern Europe, it just seemed a good fit to start the series there. Plus I live there, and the cost for visiting potential sites for settings was much cheaper.

CH: The conclusion of Innocent Blood leads right into a sequel without missing a heartbeat. When is that coming out?

JT: I don’t have a date from Oak Tara the publishers of Innocent Blood regarding the sequel. But I will tell you this: Patrick and his friends go into the Celtic Otherworld

JT: It’s fun. It’s short, so there is no long time commitment. You come up with an idea. You write it and it’s done. 1000 words makes you focus on using the right words. The plot and character development have to explode onto the story.

CH: What would you tell writers trying to break into publication?

JT: Pursue your dreams…unless your world is being invaded by monsters from the Celtic afterlife. Then do the right thing. Listen to the advice of those who’ve gone ahead of you—and tell them thanks—and help those coming behind you. And never give up. Also, take time to watch a football game.

Your next book Whiskey Sunrise is coming out in a few months and I plan to have you visit us again.

JT: Look forward to it. By the way Lighthouse Publications of the Carolinas will be having a giveaway in July for Whiskey Sunrise.

Book Giveaway to one lucky commenter.

Today I am offering an opportunity for all those who comment on this post to be entered in a drawing for an autographed copy of Innocent Blood:Equinox of Reckoning. Feel free to ask John any questions you may have on writing, Celtic lore or football. Be sure to leave your email in the comment section so we can contact the winner. ( type it using the word at for @ and the word dot for .) If you are reading this interview via Facebook be sure to go to my blog to comment if you want to be in the drawing.

I will be drawing the winners name in a week. I have found  not all my comments post right away. 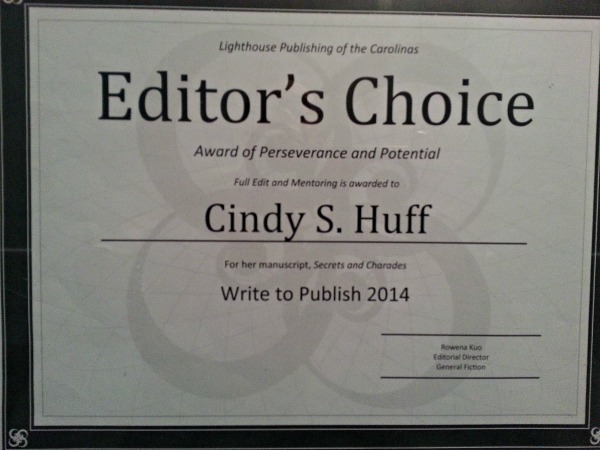 My award. I am so blessed.

For those of you who have never attended or no longer attend writer’s conferences I challenge you to rethink that. After attending writer’s conferences for six years, I have finally reaped an awesome reward. I was chosen as the recipient of the Editor’s Choice Award at the 2014 Write-To-Publish Conference. This award is for perseverance and potential. It entitles me to professional editing of my novel and mentoring and the opportunity to have my novel presented to the publication board of Lighthouse Publications of the Carolinas. Whether they actually decide to publish my book is another story. But it’s a win-win because my manuscript will be ready to present to any other interested party.

The truth about attending conferences

Often beginner writers approach a conference expecting to get a contract with the first editor they pitch their story to. They lug around their manuscript hoping someone will take it home with them. Those stories of instant contracts are few and far between, and if you get down to the real nitty-gritty of details, you will find most of these authors have paid their dues. They have attended conference after conference as true students of the craft of writing. Taking home all the information gleaned from the pros to apply to their own manuscript and marketing strategies. Networking with other writers to be encouraged as well as encourage. 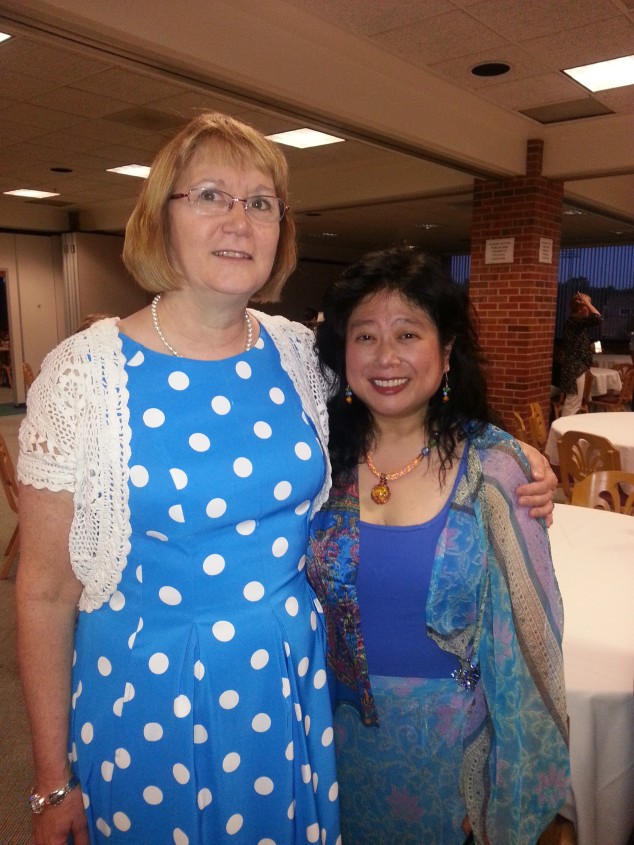 Rowena Kuo presented me with my award. She is one of the wonderful editors full of enouragement for writers that I meet at Write-to-Publish.

For me, my first conference was a learning experience. I flew to Colorado Springs for the Writing for the Soul conference. On the plane I sat next to a published author. I don’t recall her name, only the blessing she was to me. During the flight she took the time to instruct me how to pitch my story ideas and who might be a good fit. She encourage me to enjoy the conference and have fun meeting others. At the conference one devotional editor took the time to mark up my devotional to show how it would best fit her needs. She gave me tips on the right attitude to bring to the editors I would pitch my novel idea to. The editors and agents were encouraging. I went home ready to write my novel.

Guess what, folks, I returned the next year to the same conference pitched my story, got interest. Went home and sent off my novel and got all rejections. 😦

That is the nature of the beast. One publisher was brave enough to say the writing wasn’t to their standard. 😦 😦 To his credit he was absolutely correct. I knew nothing about POV and many other fiction craft techniques. So, I took another class and read more craft books and continued submitting articles and writing skits and doing whatever writerly thing God brought my way while rewriting my novel. 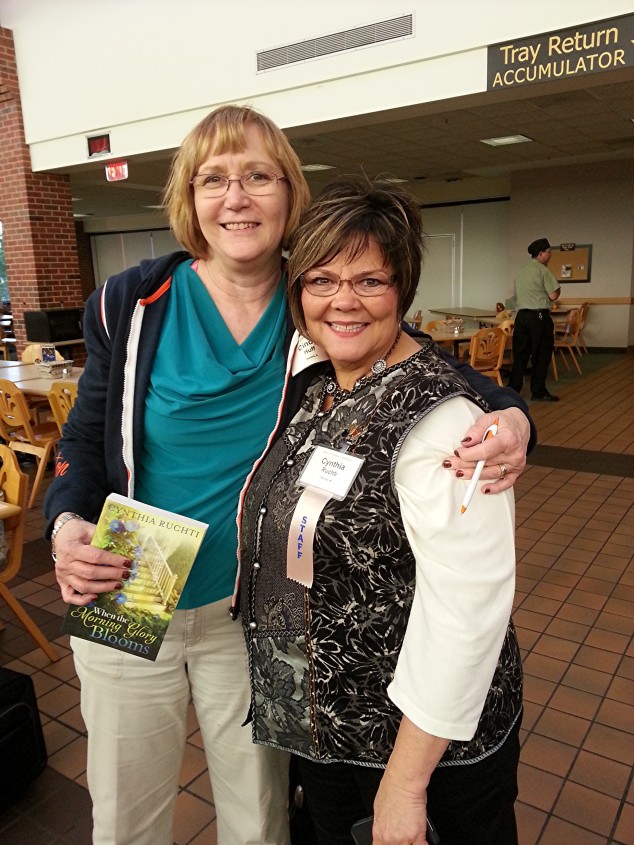 Arthor Cynthia Ruchti not only was such a wonderful encouragement on my writng journey but she autographed her novel for me.

The next four years I attended Write-To-Publish conference. Each time I went home and sent off my manuscript to those who requested it. Each time it was rejected. But I picked up other smaller writing assignments that gave me more publishing credits. I started this blog and a Facebook page. The third year I received excellent edits with my reject manuscript. I persevered through family tragedies and lots of life interrupting my rewrites and still wrote articles and short stories. Some getting rejected, others published.

This last year I reaped the blessing of my perseverance with this award. That is six years from my first conferences. Don’t wait until you have the perfect manuscript to attend. Don’t skip the opportunity because you have nothing to hawk. Come because you need to grow your craft, you need to network with writers, agents and editors. The secret ingredients at all conferences is the knowledge you can take home and the life-long friends you make. Both can grow your writing career at a faster pace than those who don’t attend.

How has perserverance at a writer’s conference benefitted you?