One key to successful fiction is suspending belief. Action movies and fantasies rise or fall on their ability to suspend belief. This week I went to see the latest Avenger movie, Antman. I’m a die-hard Avengers fan, so of course I had to see Antman, even though I feared it might not be up to the standard of the other Avenger films. The trailers did not come close to capturing the excellence of this film.

Suspension of belief was premiere here, yet the characters were believable. We all know a man can’t shrink to the size of an ant and have superhuman strength. So, let’s examine how the director, screenwriter and all those involved managed suspending belief.Perhaps we can learn a few things about suspending belief in our novels.

The movie opened with just a touch of back story to let us understand what was at stake. Scene one, the 1980s, a boardroom with Howard Stark, Peggy Carter and another guy (who we find out later is power hungry). A scientist, Dr. Pym, is telling this committee he won’t sell his technology to anyone. We know from the title of the movie Antman and a few grainy black and white photos during the meeting that his technology is mind blowing. By introducing for a brief moment characters from previous Avenger movies we know what we are in for. These establish a history timeline. I recently read a historical where Theodore Roosevelt made a few cameos. Another that mentioned the Vietnam War. Cameos of historical figures or news events help establish the believability of the unbelievable.

Then we go forward to 2015 to discover who our imperfect hero Scott is. Imperfection is important to establishing a believable story. He’s leaving prison to start over. Scott wants to be back in his daughter’s life. He isn’t allowed to see her until he has a job and starts paying child support. His ex is engaged to a cop, who doesn’t like our hero and is waiting for him to mess up and land back in prison. Our oh so relatable dilemma. We are already cheering for the underdog.

Add a few unwise decisions: Scott shares an apartment with three ex-cons. Even though he has an electrical engineering degree, he went to prison for burglary. His roommates want to use his mad skills to benefit them all financially. Here is the constant temptation to return to a life of crime when his job prospects go south.

There always has to be a villain. Not too ridiculous or out there. Otherwise we lose our desire to suspend belief. The villain, Dr. Cross invites Dr. Pym in present day 2015 to a meeting. Here we discover Pym’s daughter works there and has turned her back on her scientist father since the death of her mother. Dr. Pym is the former owner of the company and his former assistant is the power hungry executive, Dr. Cross, the villain of our story. But the villain’s real motive is gaining approval. Who can’t relate. He wants his former boss to tell him his newest invention—an army of mini soldiers is wondrous. Because these men have a past together, the agony of the rejection by the rest of the scientific community is believable.

Now we have established the main characters and their motives. Each motive will play out through the movie to its climatic conclusion. All motives are believable. Now we are more than willing to follow Scott through his transformation from ex-con to superhero. 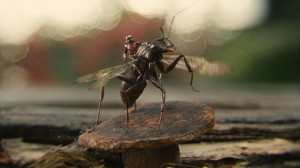 Not able to keep a job because of his record, Scott allows himself to be talked into one heist. Desperation is always a good motivator. His desperation is believable even though mentally we are chanting “Big mistake, guy.” We watch as Scott does amazing things and finds creative ways to break into all the various security levels to get into a safe. He finds a suit and a helmet and nothing else. Of course he’s a crook. He has to take something.

The previous scenes have given the audience a peek into what is to come. This is key. The first few scenes, or as a fiction writer the first few chapters, need to set up the audience for what’s to come. In this case we know an elderly scientist refused to share this same technology with the world. And now we know the villain, his former assistant is replicating the scientist’s work.

Now the audience can’t wait to see what the suit does and how our not so perfect hero reacts to it. Then we are off following Antman as he finds his destiny and saves the world along with his crazy sidekick friends.

When the adventure is over you are satisfied with the outcome and look forward to seeing more of this fascinating superhero. After all, he is a hero in his daughter’s eyes. There were lots of explosions and fight scenes and a few comic distractions and of course he gets the girl. Happy ending. But…

Many novels have the first chapter of the next book added to the end of the novel to entice us back to continue to suspend belief and buy their next book. Well, we all know Avenger movies always have two additional scenes. One to give you a feel of the next Antman adventure equal to a preview of the first chapter of the next book. And the one at the very very end after all the credits giving us a clue to the next Avenger movie. Fiction writers may leave a few plot strands unsolved to leave room for a sequel. Readers are the equivalent to the scene at the very, very end as they talk about the book and their ideas of what may happen next.

The reader and the movie goer have allowed themselves to enter into a world of imagination where their emotions and thoughts intertwine with the author’s and the scriptwriter’s world. A wonderful escape.

If we can’t pull them into our pretend world and keep them traveling on our journey to the very end, then we have not succeeded in suspending belief, and our books will end up in discount racks at the Dollar Store.

Next time you go to a movie or read a novel, try to discover at what point belief was suspended, and no matter what turn the plot takes you are right there along for the ride.

Please share in the comments below your experience with suspended belief? Or you opinion on the Avengers. 🙂