They say it’s important to read best-sellers and study their work to see how they did it. “They” can often miss some great gems in the leasser known authors. As I said before, I read alot. I love stories, I love learning things and when they can be combined in wonderful novels I’m especially blessed. I write historical romance and I reading how other historicla authors create their worlds teaches me things even if the author isn’t on the NYT best seller list. Below are four books I read over the last few months that really resinated with me. One is a series by Naomi Musch and the other is by Denise Weimer. Both excellent historical writers with other wonderful books available.

The Echoes of Heart series takes place in the first part of the twentieth century, a time less written about. Here are hNaomi Musch’s three books and my reviews of them.

Seventeen year old Marilla Eckert has been in love with Langdon Prescott, her family’s hired hand, since she was fourteen years old. Determined to win him, she’s blissfully unaware of the secret passion he feels for her older sister Delia. But when Delia weds a longtime beau, Lang settles for Marilla and marries her anyway, despite his continued longing and intent to someday win her sister away from her husband. It isn’t long before Marilla realizes where Lang’s devotion truly lies, yet she presses on, giving everything she has to offer, convinced she can still gain his love.

Then America steps into the Great War. The men are sent a world away to fight, and Marilla’s cares, coupled with the lack of her husband’s favor, finally wear her thin. When heartache and disaster strike on every front, and Marilla’s hour of need leads her elsewhere for comfort, will all of them wind up too broken to ever find their hearts’ true homes?

The setting is Wisconsin dairy country during the time of World War I. It’s the retelling of the Biblical story of Rachel and Leah, but it’s not. I found myself disliking Langdon Prescott right from the start. But that was good, because when he changes for the better I’m cheering. My heart went out to his longsuffering wife Rilla, who loved him from the moment she first lays eyes on him. This historically accurate, well-crafted story was everything I wanted to see despite a few detours before reaching it’s satisfying ending. 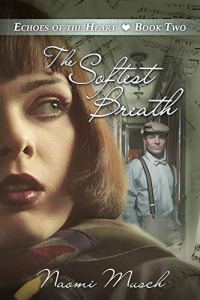 Modern girls seemed always in a hurry. Now one of them has slammed into Jacob Hessman on the street near St. Paul’s Union Depot and boarded his train. He knows her type: flapper-chic in her bobbed hair and stylish dress, so different from the sweet, country-bred kind of girl who once filled his heart.

Gwendolyn Smith’s narrow window of time to escape Hugh Phelps is closing fast. Performing in speakeasies and underground clubs has left her mistrustful of most men, but the big fellow she plows into on her flight to the station seems safe enough to attach herself to for short-term protection.

Friendship unfolds, but Gwen hides behind lies, wishing she might deserve such a God-fearing man as Jacob, and Jacob’s pursuit of a perfect wife conflicts with his mounting concern for Gwen. Meanwhile, Hugh is catching up. For Jacob and Gwen, trapped in their pasts and misconceptions, the time for truth and love is running out.

Jacob Hessman, the longsuffering friend of Marilla in The Deepest Sigh get his happily ever after. I was fond of Jacob and his desire to always do the right thing. And that conviction presents all sorts of problems when he determines to help the mysterious Gwen Smith. Loved the characters. The prohibition era setting made it so interesting. Naomi Much captures the timeframe and keeps you there through the whole story. I enjoyed the twists and turns the plot takes before the two are truly ready to tie the knot. 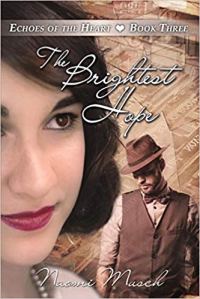 Five years after the Great War…Holly Allen is a well-adjusted war widow with a knack for running the family press. She’s over the days of waiting for a white knight to ride in and sweep her away from her cares. Besides, if Hugh Phelps is a knight, he’s certainly a black one—with his prison record, personal demons, and the ghosts of war that haunt him. When Holly hires Hugh, despite her reservations, it isn’t long before she sees the man he could really be, and as Hugh finds his niche at Allen’s Printing, he finds his lady boss equally appealing. Despite the attraction, however, Holly won’t let herself fall for a faithless man, and Hugh isn’t on gracious terms with God. Then, just when new beginnings seem possible, old heartaches from the war come calling. Now it might only be in letting go of everything dear that they both discover what real love is.

I’ll admit I was surprised when Huge Phelps, the villian, from The Softest Breath becomes the hero in this story. His reformation is not quite complete until he truly learns what sacrificial love is as he finds himself falling for Holly Allen. The surprise in this plot left me saying “oh no!” and turning the pages to see how it would all work out. A satisfying ending not only to this story but the Echoes of the Heart series.

Past betrayal has turned John Kliest’s passion to his work as a builder and surveyor in the Moravian town of Salem, North Carolina. Now, to satisfy the elders’ edict and fulfill his mission in Cherokee Territory, he needs a bride. But the one woman qualified to record the Cherokee language longs for a future with his younger brother.

Clarissa Vogler’s dream of a life with Daniel Kliest is shattered when she is chosen by lot to marry his older brother and venture into the uncharted frontier. Can she learn to love this stoic man who is now her husband? Her survival hinges on being able to trust him—but they both harbor secrets.

Denise Weimer brought the Moravian culture from the early 1800s to life for me. I learned so much about the time period while following the Kleists into the wilderness of Georgia and the Cherokee nation. Wonderful surprises and plot twists. The sprinkling of German and Cherokee words throughout the story added to the realism. Following the struggles of the arranged marriage of John and Clarissa kept me turning the pages. Many actual historical figure mingled into the story added the realism that made this story truly engaging.

My thoughts on Naomi Musch and Denise Weimer

Both of these authors captured the time periods beautifully. Showing the culture and the mind set of those from history. I learned a great deal as a lover of history and a writer of Historical Romance. And as a reader getting swept away into another time is absolutely the best experience ever.

Have you discovered any awesome authors that aren’t on the NYT Best-Sellers list that you love?  Share in the comments.