I’ve ridden very few horses in my life. But I’ve ridden on the best of them through the pages of a book. My sister, Linda, however, not only rode horses but also owned a few and did rodeo roping and barrel racing. She was one of my go-to people when I did my research for my historical romance. I was quite surprised to learn that cowboys didn’t name all their horses.

Horses were work animals serving a purpose like cows, sheep and chickens. Most horses on a ranch were used for tending cattle and transporting cowboys from point A to point B. A wise cowboy took care of his horse before he took care of his own needs. The horse he was riding aided in his survival. A well-rested, well-fed horse made the difference in the productivity of a ranch and the success of a long cattle drive. Can you imagine naming a herd of horses? It wasn’t practical.

Many cowboys didn’t even own a horse. They owned their saddle and rode whatever horse the rancher provided for him. Those who did own a horse consider it one of their prize possessions. Nameless horses tamed the west on cattle ranches, Calvary units and service animals helping lay railroad ties. So important were horses in the old west, stealing them was a hanging offense.

Jake Marcum in my novel Secrets and Charades has a fine gray horse named Traveler. Jake served in the Confederate Army in the Civil War. If you’re up on historical trivia Robert E. Lee’s horse was named Traveler. Jake admired the man and respected his horse enough to give him a noble name.

Tony Sanchez named his horse Bonita. He spends his spare time working with Bonita teaching her tricks. He is very attached to his horse and is the top horse whisperer on the ranch. He trains Artie Weaver’s horse to follow the lad like a dog. This is connected to an important plot twist.

Jake gives Evangeline a gentle mare named Sage. Evangeline has not had good experiences with horses. So Sage will also play a part in her healing. 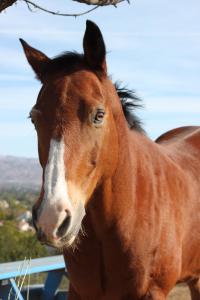 Nameless characters are also present in novels. An incidential human character may not have a name either. The waiter is the waiter and remains nameless. He serves a purpose in the scene, but unless he is a pivotal character in future scenes, he remains nameless.

A horse has no name unless there is a connection to the human characters that contributes to the plot. So if the horse has a name be prepared to see some specific action occur in the plot with that horse’s name on it. 🙂

What fictional horse is your favorite horse hero?