During my research for my historical novels, I find some interesting if not odd stuff. In my next few blogs, I’ll share some of my findings. Today, I’ll share the surprising information I found about home moving. When I think of moving, I visualize packing everything up and moving to a new home. I stumbled across a few interesting facts about home moving. I mean picking up the home and moving it, not relocating.  Not only did an occasional resident decide to move their home across town, but also during the 19th century whole communities packed up everything, including their houses and relocated the town to a better spot. Possibly to be further away from a flooding river or closer to the railroad. 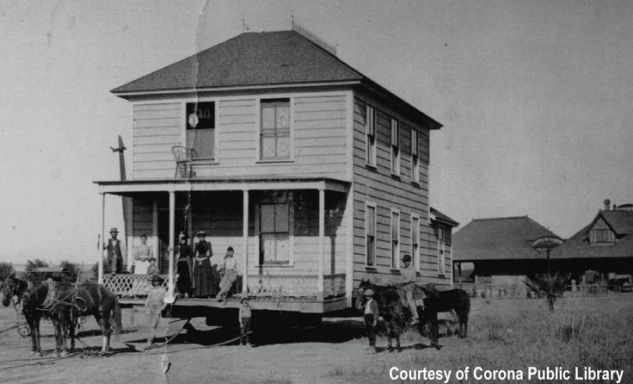 These were not mobile homes, or the tent cities often erected for miners, but cabins and framed homes. Some were taken apart log by log. The disassembled parts hauled in by wagon, train or boat and reassembled in the new location. Some homes, and here is the fascinating part, were placed on flat bed wagons and a team of mules hauled the house to its new location. Others were pushed along a log conveyor. As the house passed over one log it was picked up and a runner took it to the front of the long line of logs. The logs turned under the motion of the home being pulled by a team of horses. This continued for miles until the house was at its new location.  This was no small undertaking. 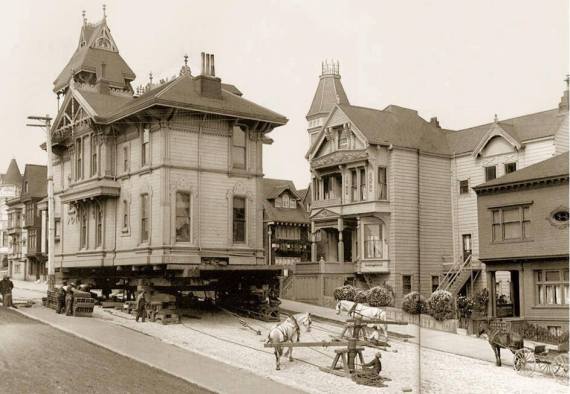 My mind envisions small cabins. But as you can see by the pictures, some buildings were quite large. The one advantage over modern day house moving, there was no electricity or plumbing to disconnect. Even so I can’t imagine how moving your house was more economical than selling and rebuilding.

This whole revelation made me wonder what kind of story could revolve around moving an entire town.

Readers, give me some ideas of what kind of story could be set amid a town’s relocation.