I’m picking up where I left off last post. I reviewed how the right setting helps the character reveal backstory and inner conflict in a natural way. Today I want to share a few examples of setting projecting mood.

Secrets & Charades is my Historical Romance set in 1872. Dr. Evangeline Olson goes west as a mail order bride. A newly married couple who are strangers are going to be nervous and fearful until they get to know each other. Jake is a very practical man. Their first stop on their journey back to the ranch is at one of his line-cabins. It’s a soddie (a house constructed of dirt) that his men use if they are too far away from the ranch to make it home before dark. This is their non-honeymoon night based a a promise Jake made to Evangeline when they first met.

Evangeline scanned the dimly lit room. The lantern revealed bunk beds built right into the dirt wall, inhabited by insects. “That bed might move after all,” she muttered under her breath. “Would you prefer I cook?” She hoped her reluctance wasn’t obvious in her voice. “Show me what supplies you have.”

“I generally keep a few things on hand, but there’s other provisions in that box on the table. I’m gonna tend the horses. Watch the damper on the fireplace. It has a mind of its own.”

Evangeline’s hand trembled as she began the simple meal preparation. After placing two potatoes to bake in the hot ashes and securing a pan of beans on the fire, she set about cleaning the table with the underside of her dress. A spider met its demise as it crawled across the table.

“God,” she whispered. “I asked for a change. Help me make the best of it.”

As she reached into the box for the tin plates, she gave thanks for one blessing. “This is the least romantic place I could imagine. I hope Jake agrees.”

The dirt and dimness help emphasize her anxiety and her last line flows from her heart to her surroundings. 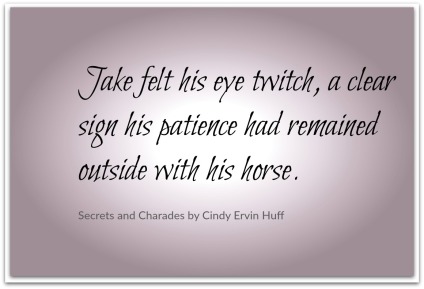 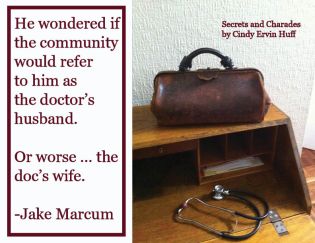 In this next example Jake takes her on a side trip on the last leg of the journey to the ranch. They visit the homestead he grew up in. This gives him an opportunity to tell her some unpleasant things about his past as they look at the run-down place.

Standing in the ruins of his past, Jake shared his history. “Ben taught my pa everythin’ he knew about ranchin’. They became good friends.”

“When did you move from here to your ranch?”

“After the war, I came home in pretty bad shape. The girl I’d hoped to marry had married my little brother, Robert.” Jake tried to sound matter-of-fact even though raw emotions lingered near the surface with his fatigue. “My pa died while I was off fightin’. I couldn’t bring myself to live in the same house with Robert and Nora, so I hired on as foreman for Ben.”

Evangeline nodded for him to go on.

“I was drinkin’ and carryin’ on, tryin’ to forget the war, not proud of my actions back then.” He removed his hat and wiped the sweat from his forehead with his sleeve. “Ben took me under his wing and showed me the light. Helped me forgive myself and receive God’s forgiveness. Came to Jesus because of Ben. I owe him my life.”

As they wander through the abandoned house and barn, Evangeline suggested they fix the place up. Her attitude gives him hope that this marriage can work.

There are times in the close confines of the wagon they fuss with each other because of fear and fatigue. Readers learn bits about their personalities as the story continues.

As you build your story world, think about places certain things can be revealed.  Places that seem natural for inner reflection or verbal sparring. I just completed a novella set in a blizzard on a ranch in Kansas. My settings are limited through most of the story. There are many scenes in the cabin, some in the barn. But key scenes take place out in the snowy woods, and in town. 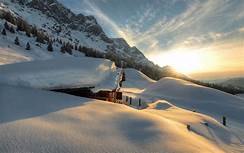 Don’t just write a setting for setting sake. Your last vacation destination to Merrimac Caverns might not be the best setting. Unless, the fear and anxiety you experienced while the tour guide led you through the dark recesses fits your heroine’s escape plans. Then bring up all those observations and link them to your characters feelings.

A tour of downtown Aurora in New Duet was necessary for my readers to understand Isabella’s new life. Evangeline’s first visits to shops in Charleton, Texas in Secrets & Charades helps readers know her better as she met its inhabitants. And the store room on the snowbound ranch in my novella gives a feel for the past without lots of verbiage.

What is your favorite scene from a novel that brought you closer to the characters?

Point of view (POV) is always a challenge. I shared in a previous post Manuscript in a box: Print It Out For A Fresh Perspective how I found some interesting booboos. As I read through I noticed I’d skewed POV in a few places. In a scene where we are experiencing everything from Dan’s POV, I wrote his words warmed Isabella’s heart. How would Dan know that? He wouldn’t. Unless I gave him the ability of a mind reader, he wouldn’t know. He might have noticed her smile or a blush. But he can only experience his own warm heart.

POV is like wearing camera glasses. You can only see through one characters eyes. Photo from morguefile.com

Imagine, as you write, you are wearing camera glasses. You can only write through the eyes of one character. You can’t know the inner thoughts of the other characters in the scene. In Dan’s POV if his words offend Isabella, I need to have her verbalize it or show body language that the reader can experience with Dan.

Point of view has more facets beyond staying in your character’s head in dialog. POV takes in setting. Have you ever read a book where the main character is male, but the description of setting through the eyes of this character seemed more feminine? As your character enters a new setting, think about how he might see it. A cowboy might enter a saloon with a different focus than a school marm.

Setting is view through a lens distorted by the characters perception and emotions.
Photo from morguefile.com

Let’s put on our camera glasses and look at the saloon from each POV.

Tony batted his Stetson on his thigh to release some of the trail dust before placing it back on his head. Passing through the saloon’s swinging doors the piano music invited him to relax after days on the trail. A tiny blond with sultry blue eyes and painted lips swayed toward him. He knew he’d part with some of his wages to steal a few kisses. Tony placed a silver dollar on the bar smiling at the bartender.

“Keep the whiskey coming ‘til this is gone.”

The droopy mustache twitched as the bartender poured. “The best in the house, sir.”

Tony gulped the watered down whiskey as a rosewater scent surrounded him and a tiny hand touched his arm.

Millie’s heart constricted as she stepped through the swinging doors of the saloon. Curious looks from sweaty, ill-kept men focused on her. A blond woman in a colorful short dress that revealed too much of her womanly form scowled at her. The bartender’s eyes roamed Millie’s form, his droopy mustache straightened with his smile, revealing missing teeth. Millie took a breath to quiet her racing heart only to have her nose assailed by body odor and smoke. Bile rose in her throat.

Mille had warned her little brother. “Mark my words, Henry, you enter that den of iniquity again you will find me dragging you home.”

“Sis, you don’t have the stomach for it.” Henry had laughed at her scolding threat.

Standing in the doorway her eyes adjusted to the dim light. “We’ll see whose laughing once I get you home.” Anger overtook her timid spirit.

Mille spied Henry’s red hair under the familiar straw hat. He hadn’t noticed her yet. His eyes fixed on his cards. She approached the table in the back of the saloon. The piano’s out of tune rendition of Camp Town Races drowned out her quick footfalls on the tobacco stained wooden floor.

Notice how each character experienced the room differently. Tony found it a respite from the trail. While Millie saw the worst of the place. When writing a scene think about from whose eyes the reader is viewing the setting. The setting description can be revisited with a different character POV if it gives the reader a better picture of the surroundings and builds the story.

Sally adjusted her bodice before descending the stairs. She counted the steps. There were thirty. Each step pulling her down to a job she hated. A job full of shame as red as the velvet curtains hiding the stage where the floor show took place three times a night. On the last step she took a deep breath and pasted on the sultry smile Maggie had taught her. The Rosebud was full of cowboys and gamblers anxious to take their money. Sally needed to work the room tonight. She’d refused to be a part of the floor show which would have netted her an extra fifty cents a night.

She was a mother now and her baby lay in his crib with fever. The piano music drowned out his whimpers. Sally surveyed the room and fixed her gaze on a young cowboy not yet inebriated. This saloon had more class than any of the others she’d been unfortunate enough to work in. The bartender loved to look but never touched. Maggie kept a clean house.

“Flatter ‘em, dance with ‘em. Even a kiss for the right price. But if they get to handsy slap their face.”

Maggie’s muscly, tall husband, Francis, watched for offenders and manhandled them out the swinging door before they had a chance to protest.

Sally felt safe for the first time in years. Baby Jimmy was cared for by Maggie’s maid when she worked. No patrons were allowed upstairs. If she didn’t earn enough tonight she’d volunteer to help clean after closing. Baby Jimmy needed a doctor’s care. This was no kinda place to raise a child but what other choice did she have. Placing her hand on the cowboy’s shoulder she whispered near his ear.

“Buy a girl a drink, handsome.”

Sally’s POV revealed something we hadn’t expected in a saloon. A place of safety. Now we have three story lines brewing. And three different perspectives of the same setting.